Here is Russell’s section of the 2016 subscription Brochure: 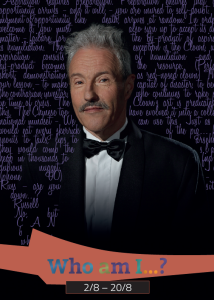 “Aspiration requires preparation. Preparation ensures that when opportunity arrives – and it will – you are inured to self-doubt.

The moment of opportunity, like death, arrives at random. In order to welcome it, you must also sign up to accept its dark-matter – failure, for the by-product of aspiration is humiliation.

The exception is the Clown, whose aspiration consists of humiliation –and the by-product becomes the resource. (Performs short demonstration as red-nosed clown)
This is our lesson – to make capital of disaster, to become the contrarian investor, who continues to rake profit in time of crisis.

The Clown’s art is predicated on this. The Chinese too, have evolved it into a collective national mindset – ‘We can use this’. Just as they would eat every skerrick of the pig… from snouts to tails, lips to arseholes, they would comb the slag-heap in thousands to find the dubious nugget.”

It had happened. What I had so longed for – intangibly away in the future – I had wished into sudden existence, via the genie of hubris.

Opportunity had not bothered to knock. It strode towards me, sleeves rolled, flanked by its foul and wiry posse. These I recognised with a shudder – Apprehension, Anxiety and Fear-of-Failure, skulking like filthy figures from a gutter Commedia troupe.

My stomach dove through my fundament, but I made quick ground, slammed the door, and welcomed the dirty three with… (SFX – toilet flush)

Suddenly – this was the opposite of trivia.

Glenn – “Which city, the capital of Transvaal, is also…” (SFX – Buzzer )
Russell – Pretoria.